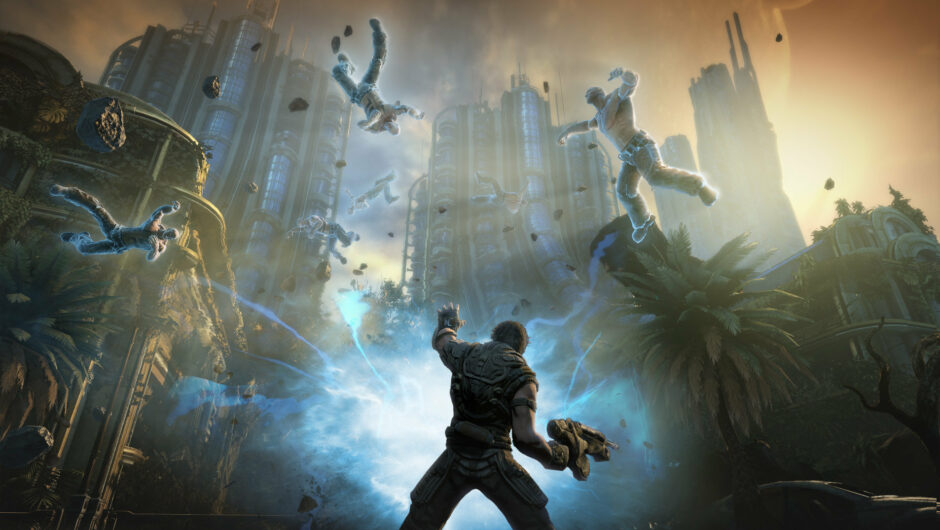 With Bulletstorm you will experience marvelous scenery, beautiful graphics and a really nice refreshment of the first person shooter genre.

People Can Fly manages to make an epic experience by renewing the First Person Shooter genre via expanding the players moves and encourage them to use them by rewarding the player with points that the player needs to upgrade weapons and moves. Shoot, kick and swear your way through the story. For me, it was a great experience and I am no big fan shooter games. That’s because of the regular boring shooters, that most of the time is political and based on real life war zones, which People Can Fly even made fun of as part of their promotion – they also bullied the Halo games. Bulletstorm is different, and I was drooling all over the game when I first heard about it, and I was not disappointed, they delivered what they promoted.

Meet your badasses and kick some butt!

You get to be a badass who kick seriously ass on the planet Stygia sometime in the distant future. Your character Grayson Hunt is a soldier and as you play the game, you get the feeling that you are a part of a losing team. As the leader of team Dead Echo and captain of the Battleliner Galleon Spectre you slowly discover through the first few chapters that your General is actually the universe’ biggest asshole of all time, letting Grayson and his team kill innocent people all while they were under the impression of the fact that they killed dangerous people and they protected the world – the only person they protect in doing this, was General Sarrano. Of course Gray wants revenge, and only one thing can remedy what General Sarrano did – and that’s to kill Sarrano, which is your main objective.

While running I felt heavy and clumsy, but that actually suits the big bulky design of the characters and the developers made Gears of War – the character builds and movement is very much inspired by that. While making the different skillshots and go for them is very fun, some people might feel that the game has a tendency of being a bit repetitive, but actually I couldn’t disagree more. A generic shooter is repetitive, this game is not – there’s way too many different ways of killing the enemies – feeding a carnivorous plant by kicking the enemy into it, steer your sniper bullet into your enemy or using your electric whip and make the charging horde of enemies fly up in the air into the spikes above, making you kill them all at once, multiplying your score.

I experienced a few bugs – you can’t jump in the game, so if you just happen to end up on something you don’t belong on, you can’t get down from it – I had to load from last checkpoint a few times. The other bug I just happen to stumble upon was the AI – friend or foe – could jump out of the reachable area, die or be elsewhere than expected, preventing me from unlocking the next part of the path in the game.

The scenery is unique and well made, the art style is fantastic, and it suits really well into what the story is all about. You get the feeling of what the planet used to be, and all that is now pulverized into decayed buildings that are about to turn into gravel, making it life threatening just to navigate around in the cities. I like the over the top humor with the swearing and bad-ass futuristic mercenaries that keep failing, but yet you still survive. Though, I did cringe a few times over the swearing because at times it was a bit excessive.

It was a great experience to get through the story in this game, I highly recommend everyone with just a slight interest in shooting and beating in games to pick this game up and try it. Yes, you are following a narrow path in the story, you can’t get lost, and it’s unlikely you’ll miss anything if you’ll take just a little time to look around in the different rooms and openings you’ll meet throughout the game. There’s more than one woah-moment, which for me, is essential when it comes to great gaming experiences. This game gets top score for experience, the graphics and a great storyline and a new input in gameplay – but it loses half a heart because it’s not a flawless experience as a few glitches occurred and it could have been more varying, but it’s still a real memorable experience, that you won’t forget soon.