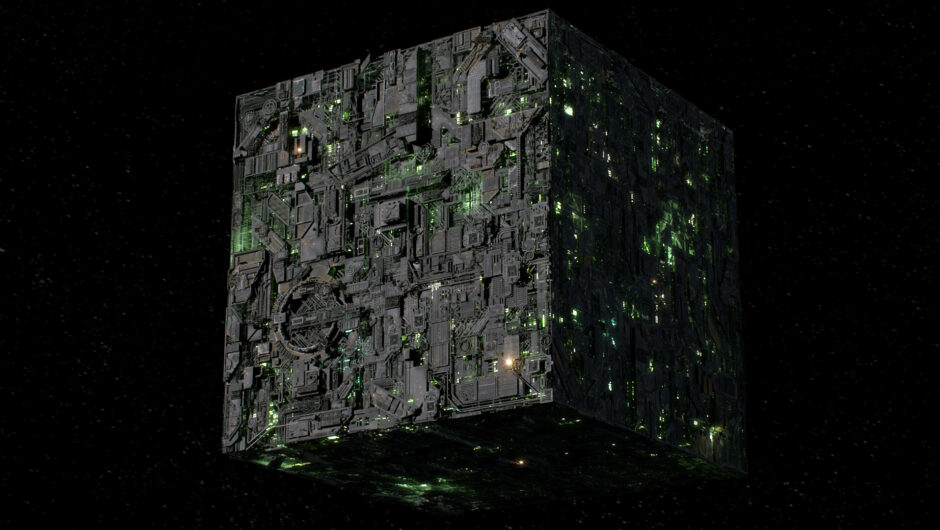 Spoilers from Star Voyager, The Next Generation and Enterprise series.

The Borg is somewhat of a mystery in the Star Trek universe, yet we know the race quite well from several encounters with them in their attempt to reproduce by assimilation. It’s a race that takes over other species and uses technology to add these individuals to their forces and add useful information to develop the “species”. Let’s ask a few questions first.

After being published, this post got an addition at the bottom.

Are you able escape from The Collective?

Answer is a simple yes. We have seen several examples of different species getting freed from The Borg Collective. One of the more memorable ones, no less due to the fact that half of Voyagers series is following her, is Seven of Nine. We meet her at the beginning of season 4 of Star Trek: Voyager, and Captain Janeway decide to try and free her from The Borg, make her a human again – an individual. She fights it, but eventually she comes around.

Another episode of individuals getting freed from The Borg is shown in the episode “Unity”, the 17th episode of the 3rd season in Star Trek: Voyager. We follow Chakotay as he slowly finds out the truth about the mixed species being stranded on a desolate planet. They was previously captured by The Borg and assimilated, but when a cube lost connection to The Hivemind, they slowly began to remember how life was before being assimilated. Not all the species agreed with each other and issues rose. Chakotay and the rest of Voyager is asked to help.

And let’s not forget that The Borg captured Captain Picard in an attempt to communicate better with the earthlings, in season finale of season 3 in Star Trek: The Next Generation. This is another sign of time travel. The Borg knowing that the human species aren’t dealing too well talking to a group of people, especially during a collaboration, they learned this in the beginning of Season 4 of Star Trek: Voyager. Janeway and Tuvok did not agree to get simple Borg implants for communication, and Janeway proposed later on that The Borg designated one single drone to communicate with them. The Borg must of have used this information in the decision to assimilate and use one single person to communicate with earth when they approached with the intent of assimilate. Picard of course later got rescued and recovered.

Can you escape The Borg?

There is a few mentioned instances where parts of a species have been eluding The Borg. Guinan, an El-Aurian which is a humanoid species with extra ordinary senses as seen a few times through out Star Trek: The Next Generation series, tells about her species being scattered all over the galaxy during a Borg invasion and their attempt to assimilate her species and homeworld.

Let’s not forget Species 116. Voyager meets Arturis sometime after having fought back the invasion from Species 8472 and in the aftermath of this, The Borg invade the homeworld of Species 116 and Arturis underlying intent is to make Voyager pay for what happened. His species have been evading The Borg for centuries, but The Borg kept climbing ever closer. The invasion by Species 8472 and the following war was a salvation for his species. Janeway, being more scared of 8472 than The Borg, teams up with The Borg to defeat them. This happens in “Hope and Fear”, the ending episode of season 4 of Star Trek: Voyager.

Has The Borg the ability to time travel?

In the movie Star Trek: First Contact we see The Borg time travel to earth – so we know for sure that they are capable of travelling through time – so timeline does not matter at all. In First Contact, we see Picard going through the vortex and rectify things, restoring the timeline for Earth. The wrecked Borg ship is later found by a group of researchers as seen in “Regeneration”, episode 23 of the 2nd season in Star Trek: Enterprise.

So why isn’t The Borg using time travel more? The theories I’ve seen by other fans makes sense. It is ineffective. We know they have transwarp technology, even ability to travel to other galaxies and dimensions, as seen and mentioned in Star Trek: Voyager. The Borg finds Fluidic Space and Species 8472 and engage a fight in attempt to assimilate – due to the nature of 8472, it turns out it wasn’t as easy as The Borg is used to and they fought back, even invading Normal Space. My best guess as to why The Borg ain’t using time travel more is two-fold. It requires too much power and thus is ineffective unless there is knowledge of whats in the other end of the travels, the other is fear of making things worse. They know the risks from having assimilated thousands of other species across the universe.

So how did The Borg come into existence?

But I digress, the main question remains: What made the Borg? My theory builds on happenings in the Star Trek universe, and we don’t even have to follow a timeline, as we already covered: The Borg can travel in time.

At the very beginning of season 3 in Star Trek: The Next Generation, we follow Wesley Crusher throughout the episode, as The Enterprise is experiencing some technological issues. Eventually he comes clean to his mom, Doctor Crusher, as she shows some compassion and worry for him. He explains that the night before he was doing some school work with nanites. Simple small robots that are created to repair damaged human cells. During this he fell asleep and was awoken by a communication from Commander Riker, and he hurriedly closes up an open box. First mistake.

After telling his mom about the Nanites, and the traps in the attempt to recapture the Nanites she and Wesley tells the rest of the bridge crew about what is causing the technological issues. They find the nanites in the main core of the computer. The problems is troubling, such as shields not working and a simulation of an attack from The Borg.

I am thinking one of the nanites stumbled open a log from an earlier attack, and it triggered the sensors to believe it was happening for real, making the crew on the bridge real nervous about the missing shields. Later on in the episode the scientist named Stubbs that was onboard Enterprise for doing an experiment decided to try and coarse the crew to exterminate the nanites with gamma radiation, and he took it upon himself to clear part of the core from nanites. That triggered the nanites to respond really quickly by triggering different systems on purpose, nearly killing everyone aboard.

Eventually Picard establishes contact with the nanites with help from Data. Data allows the nanites to take over his systems to communicate with Picard and the rest of the bridge crew – and Stubbs who killed a group of the nanites. He apologises and Picard suggests to end the conflict. The bridge crew eventually evaluates the nanites as a new species and the nanites request a relocation. Stubbs have enough influence and the nanites are relocated to a planet called Kavis Alpha IV. Mistake number 2.

In the filmed series we do not hear more about the nanites, so the rest of this is completely my theory. The nanites kept evolving on Kavis Alpha IV, and a couple hundred years later did no longer have space on the planet or they ran out of material for their replication process. Laying dormant for a while to conserve energy, a humanoid species finally visits the planet and picks up some of the technology.

From here on, the base instinct of the nanites triggered and they started to infect the body of the species. They did not stop. They kept evolving and eventually got to be a space faring species, looking for new species to infect and learn from. Assimilation. Eventually, The Borg kept meeting enough resistance from developed species, and when they finally found a species able to time travel, they used the technology to travel back in time to be able to cope with the fights better and get a higher “win-rate”. Efficiency.

When they assimilated even more species with time travel abilities, especially those that were still in the test-phase, The Borg got horrified of doing time travel, hence their very limited use of time travel. They could not risk altering a timeline that so far was to their advantage.

When doing this blog post I did some research to get some details right, including mentioning the right episodes in case my readers want to jump directly to these encounters in the series. I met a reddit post talking about this: Wesley Crusher being the inventor of The Borg. I was well aware I can not have been the first person to come to this conclusion. One of the comments on the post shut the theory down with the fact that The Borg Queen admits that once were flawed, claiming that they used to be humanoids.

“Human! We used to be exactly like them. Flawed. Weak. Organic. But we evolved to include the synthetic. Now we use both to attain perfection. Your goal should be the same as ours.”

Lets flip it. What if the nanites sees flesh as inferior and thus synthetic? That means in fact that The Borg origins from the nanites that Wesley Crusher experimented with, and Picard decided to let loose on a desolate planet only to get infected by The Borg later on in the same season of the same series – episode 26 of season 3, “The Best of Both Worlds”. Time travel makes my head hurt.

I realised I was a little short in shooting down the theory about The Borg Queen referring them to be organic. I wanted the post to go live, so I was inpatient and did not take my time to let the post wait a day.

So she refers The Borg as weak and organic earlier on. What if she is referring to the species they assimilated? After all, organic brains work a lot more on the ego centric side, on the “I” and “me”. We see this with Hugh in “I, Borg”, episode 23 of season 5 in Star Trek: The Next Generation. In “I, Borg”, Hugh whith the designation Third of Five slowly realises his own “ego” after Enterprise cuts him off from the hivemind and interact with him in a human way.

He actually gets so far that he willingly sacrifices himself to save Enterprise. The episode ends with the Enterprise crew asking Hugh if he wants to leave or seek asylum aboard the ship. He concludes it’s too dangerous for his new friends to stay aboard and Enterprise beams him back to the moon where they found him.

Another example of a humanoid with Borg tech is One. Technically, he was never born humanoid. In the episode “Drone” – season 5 episode 2, in Star trek: Voyager we follow One, which is “born” from a transporter incident, where Seven of Nine’s nanoprobes infects the Doctors mobile emitter. This ultimately leads to a 29th century Borg to evolve, after it takes a sample of human DNA.

One could argue this incident may also have been Point Zero of The Borg species to evolve, but why wouldn’t they keep the 29th century tech? This is unlikely.